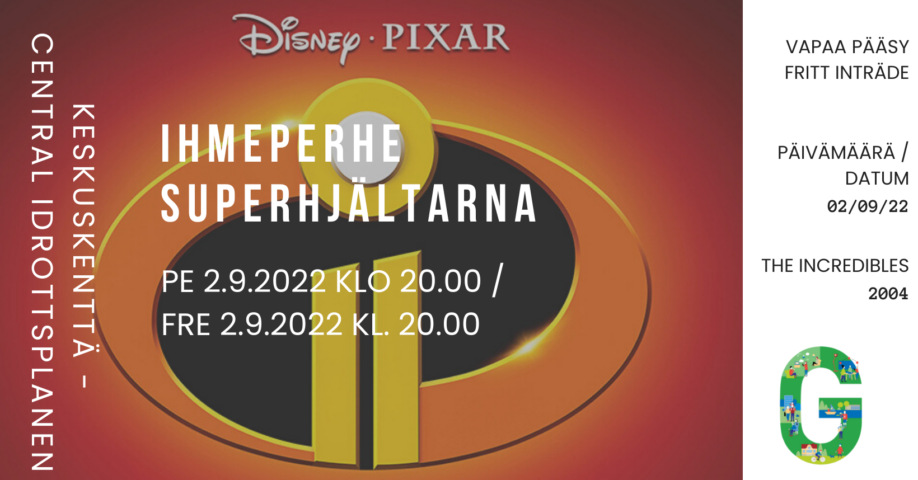 “I never look back, darling! It distracts from the now.” ― Edna Mode

Sometimes it’s still fun to look back, especially when it comes to great movies!
Take a trip down memory lane with the movie The Incredibles (2004). The Cultural services and the youth council of the city of Kauniainen is organizing a outdoor movie night. The event is held at Kauniainen’s central sports field on Friday 2nd of September 2022.

Information about the movie:
The Incredibles (2004)
117 min
K7
The movie is showed in English.

Public opinion turns against superheroes due to the collateral damage caused by their crime-fighting. After several lawsuits, the government initiates the Superhero Relocation Program, which forces “supers” to permanently adhere to their secret identities and abandon their exploits.

Fifteen years later, Bob and Helen Parr—formerly known as Mr. Incredible and Elastigirl—and their children, Violet, Dash, and baby Jack-Jack, are a suburban family living in Metroville. Although he loves his family, Bob resents the mundanity of his suburban lifestyle and white-collar job as an insurance adjuster. Together with his best friend, Lucius Best, formerly known as Frozone, Bob occasionally relives “the glory days” by moonlighting as a vigilante.

Our principles for safer space
We treat each other in a friendly manner. If help is needed, we provide it.
People are diverse, and this diversity should be celebrated. We treat everyone respectfully.
We do not make assumptions about anyone’s gender, sexuality, background, ethnicity or functional abilities. We respect everyone’s own narratives and definitions of themselves. Furthermore, everyone is entitled to privacy.
We do not expect everyone to know or master the same things.
Identities and life situations are diverse; we do not use excluding language.
No one is treated badly or belittled based on their individual qualities such as gender, age, appearance, health or background.
Racist and homophobic or transphobic language and behaviour are forbidden.

What: Outdoor movie night – The Incredibles (2004)
When: Friday 2.9.2022 Doors 19.00, movie starts 20.00
Where: Kauniainen Central sports field
Bembölentie 5
Costs: Free entrance
For who: The youth in Kauniainen

Substance abuse among young people – what guardians should know

What substances are teens using? Are you worried about your child’s experiments with substances or substance abuse? Where can I get help and support?

All the Scents of the Earth

Trio Flamme performs Carita Holmström’s songs about our life on earth. Songs of love and longing as well as hymns to nature alternate with songs of sorrow, flight and that there is always someone who cleans up after every war.